We use Cookies to give you a smooth, enjoyable and safe experience using this website and to provide relevant and helpful advertising from Google. If you are happy with this then simply click the green OK.OK

We use Cookies to give you a smooth, enjoyable and safe experience using this website and to provide relevant and helpful advertising from Google. If you are happy with this then simply click the green OK.OK 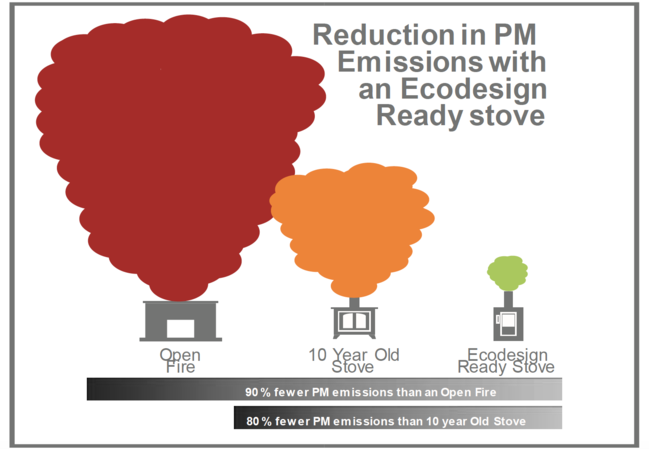 Stoves and the Clean Air Strategy

Here's all you need to know about Stoves and the Clean Air Strategy.

Department for Environment, Food and Rural Affairs (Defra) has included wood burning stoves in their Clean Air Strategy, and they are recommending installing Stove Industry Alliance Ecodesign Ready stoves and using Ready to Burn wood fuel. The Mayor of London has also given the same advice in adverts that he paid for in the Evening Standard. You can be confident buying an SIA Ecodesign Ready stove that they are not going to banned.

I’ve heard that wood burning stoves give off a lot of air pollution and particles.

All wood combustion will give off some particles but a modern stove burning the right fuel has very low levels of emissions. This is why they’re being supported by Defra and the Mayor of London.

A modern SIA Ecodesign Ready stove will produce 80% less emissions than an average 10 year old stove. This is based on independent test results from an accredited laboratory.

This figure has been in the press, but is based on the proportion of additional particulates from all wood burning over and above the normal level of particulates that exists in the urban environment from normal activities throughout the year including transport. If all particulates are considered then the figure comes down to around 16%, which covers all wood combustion including open fires, incinerators, bonfires and stoves.

Best estimates of the particulates attributable to stoves only are around 3%. Furthermore as much of this will be from older stoves, by replacing these with modern SIA Ecodesign Ready stoves, the emissions could be reduced by a further 80% to less than 1%.

Is wood a sustainable resource?

There is enough home-grown wood to ensure it is sustainable. Furthermore, new SIA Ecodesign Ready stoves are more efficient than either an open fire or a ten year old stove and therefore use less logs to generate the same heat output.

What is different about an SIA Ecodesign Ready stove?

SIA Ecodesign Ready stoves have been independently tested to verify that they meet the forthcoming Ecodesign test criteria that will be introduced as a requirement in 2022. These stoves have been tested to ensure low outputs of CO, OGC’s, PM’s & NOx, whereas standard CE approved have to pass a far easier standard on CO.

SIA Ecodesign Ready stoves also have to have efficiency of at least 75% as opposed to the 65% requirement for a standard CE approved stove.

Are wood burning stoves at all “green”?

Yes, wood burning stoves are a genuine renewable low carbon method of heating, and the modern stoves also have low levels of emissions. A key aspect here is the carbon neutral nature of wood burning, as the trees remove as much CO2 during their lives as they produce being burnt in a wood burning stove.